On July 13, 2017, Jaguar unveiled its new E-Pace in a world premiere in London and VEHICO contributed to the success of the Jaguar world premiere with its driving robots.

The E-Pace, driven by British stunt driver Terry Grant, completed a 15.3-meter jump, spinning 270° and landing safely on four wheels. This was the first time that the jump known from the 1974 James Bond film "The Man with the Golden Gun" had been performed with a production vehicle.

The stunt was prepared for several weeks at Santa Pod Raceway in England. The dangerous preparation jumps were driven unmanned with VEHICO driving robots. The CS-B20 steering robot and the CC800 combined brake and gas pedal robot were installed in the SUV in conjunction with the EBR fail-safe emergency braking robot. Our Inter Robot Communication IRC was used to monitor the robots from outside the vehicle. The Jaguar equipped with the VEHICO robots completed numerous preparatory jumps in order to be able to carry out the tuning with regard to ramp, vehicle, speed etc. for the desired trajectory of the barrel roll. The robots were thus able to implement the desired specifications very precisely. The sometimes very high loads of up to 5.5g posed no problem for the robust robots. After the preparation jumps, the stunt driver Terry Grant was able to take the wheel.

VEHICO is proud to have contributed to the success of the launch with its driving robots.

The realisation of this world record jump was successful teamwork. In addition to VEHICO, the following have contributed to thisMcHenry Software, Racelogic, Bagjump, StarEvents, Imagination, SHP Engineering und Terry Grant.

The video "New Jaguar E-PACE - Behind the Scenes of the Barrel Roll" documents the development of this stunt from its beginnings to its world premiere in London. 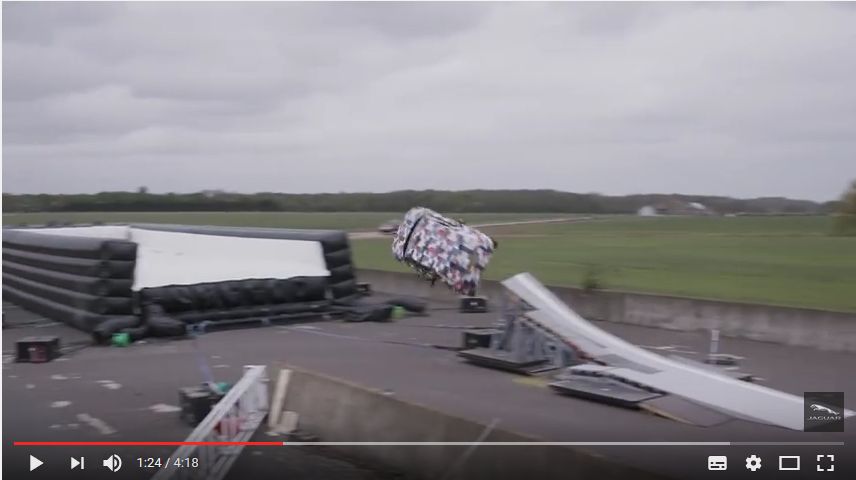